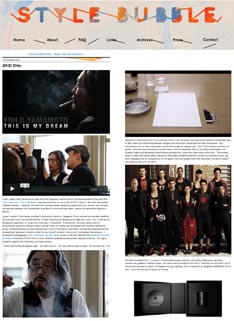 I didn't expect Yohji Yamamoto to utter the word "gorgeous" several times in the opening scene of the short film Yohji Yamamoto: This is My Dream that documents the run-up to the S/S 10 Y-3 show in New York, directed by Theodore Stanley. I associate the word with a brassy blonde making kiss noises with juicy red lips, not a 68-year old Japanese designer who undoubtedly is up there in mine and many other's top ten of inspirational figures in fashion.

I guess I wouldn't mind being cocooned in Yamamoto's version of 'gorgeous' if that involved an oversized, perfectly formed black wool coat, something that I've been searching for obsessively on eBay ever since I was 17 and had an ephiphanal experience of trying on an Yohji coat in Hong Kong. To Yamamoto, the word doesn't call for sensationalist excess but instead is about boiling it down to clothes that are seeped with heartfelt feeling and purity. Seeing Yamamoto at close quarters and at work in this half-an-hour short, only serves to demonstrate the devastatingly "gorgeous" simplicity which he and his staff embody in dress and in the designs they produce. I enjoyed his autobiography Yohji Yamamoto: My Dear Bomb as well as the Wim Wenders film Notebook on Cites & Clothes immensely and this film is a truly wonderful updated accompaniment despite its brevity. The highly quotable nuggets from Yamamoto just keep coming…

"I didn't want to disturb people's eyes. Too many colours. I am very tired to look at colour. For my total life, I am comfortable being in black."

"I was born in the ruins (of bombed Tokyo) I had no memory of Japanese culture because those things were all destroyed. This is my root - the ruined Tokyo."

Yamamoto's relationship with Y-3 is surprising in that it was Yamamoto who approached adidas to collaborate back in 2001 before the relationship between designer and mainstream brand had even been formulated. The reovlutionary turn of that relationship is something we take for granted now. The Y-3 S/S 10 show therefore is a perfect vehicle for this documentary to take place, with its memorable World Cup related shenanigans, and Zinedine Zidane and Yamamoto himself taking a penalty kick (which they didn't show in the film). The frenetic pace of a New York Fashion Week casting and show prep provided the perfect contrast to Yamamoto's quiet and brief musings as well as a surprise turn on the guitar (not many people know that Yamamoto recorded an album and regularly jams with his band).

The DVD is available from Y-3 stores in limited edition boxes that also come with a cedarwood, patchouli, lavender and grapefruit scented candle, one that's worth burning for a bit WHILST watching the DVD and if you're lucky to have be able to watch a TV/laptop from your bathtub, then it makes for an altogether GORGEOUS half an hour - that's the Yohji sort of gorge by the way.