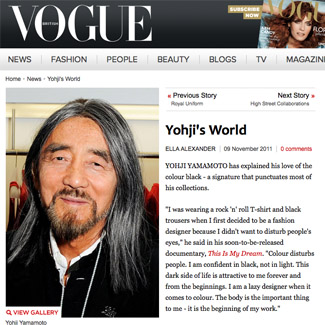 YOHJI YAMAMOTO has explained his love of the colour black - a signature that punctuates most of his collections.

"I was wearing a rock 'n' roll T-shirt and black trousers when I first decided to be a fashion designer because I didn't want to disturb people's eyes," he said in his soon-to-be-released documentary, This Is My Dream. "Colour disturbs people. I am confident in black, not in light. This dark side of life is attractive to me forever and from the beginnings. I am a lazy designer when it comes to colour. The body is the important thing to me - it is the beginning of my work."

The designer, who has been working in fashion since 1977, says he is not immune to the pressures that his peers have become victim to.

"Sometimes I get down, I get tired and so isolated," he said. "I have many friends in music and they cheer me. Music is so pure."

Yamamoto also revealed why fashion still manages to excite him, despite a career of over 30 years.

"No one in the world looks the same and no woman has the same body," he explained. "I can keep working because the woman's body is always mysterious. Dress-making doesn't ever lie because cannot lie - they show everything."

Yohji Yamamoto: This Is My Dream is available now on DVD from the Y-3 London flagship store, 54 Conduit Street, W1S 2XU.