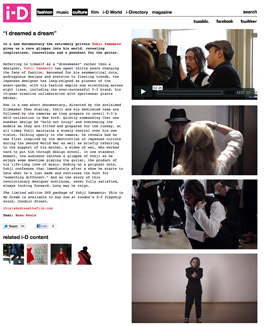 In a new documentary the extremely private Yohji Yamamoto gives us a rare glimpse into his world, revealing inspirations, innovations and a penchant for the guitar.

Referring to himself as a “dressmaker” rather then a designer, Yohji Yamamoto has spent thirty years changing the face of fashion. Renowned for his asymmetrical cuts, androgynous designs and aversion to fleeting trends, the Japanese designer has long-reigned as pioneer of the avant-garde, with his fashion empire now stretching across eight lines, including the ever-successful Y-3 brand, his 10-year creative collaboration with sportswear giants Adidas.

Now in a new short documentary, directed by the acclaimed filmmaker Theo Stanley, Yohji and his dedicated team are followed by the cameras as they prepare to unveil Y-3’s SS10 collection in New York. Quietly commanding that one sneaker design be “bold not noisy” and overseeing the models as they are fitted and prepared for the runway, at all times Yohji maintains a steely control over his own vision. Talking openly to the camera, he reveals how he was first inspired by the destruction of Japanese culture during the Second World War as well as briefly referring to the support of his mother, a widow of war, who worked hard to put him through design school. In one standout moment, the audience catches a glimpse of Yohji as he enjoys some downtime playing the guitar, the product of his life-long love of music. Ending on a poignant note, Yohji confesses that immediately after a show he starts to hate what he’s just made and continues the hunt for “something different.” And so the story of this revolutionary designer continues, never fully satisfied, always looking forward. Long may he reign.

The limited edition DVD package of Yohji Yamamoto: This is My Dream is available to buy now at London’s Y-3 flagship store, Conduit Street.