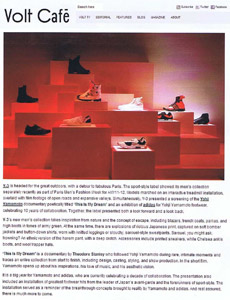 Y-3 is headed for the great outdoors, with a detour to fabulous Paris. The sport-style label showed its men’s collection separately recently as part of Paris Men’s Fashion Week for A/W11-12. Models marched on an interactive treadmill installation, overlaid with film footage of open roads and expansive valleys. Simultaneously, Y-3 presented a screening of the Yohji Yamamoto documentary poetically titled ‘This Is My Dream’ and an exhibition of adidas for Yohji Yamamoto footwear, celebrating 10 years of collaboration. Together, the label presented both a look forward and a look back.

Y-3’s new men’s collection takes inspiration from nature and the concept of escape, including blazers, trench coats, parkas, and high boots in tones of army green. At the same time, there are explosions of riotous Japanese print, captured on soft bomber jackets and button-down shirts, worn with knitted leggings or slouchy, sarouel-style sweatpants. Sarouel, you might ask, frowning? An ethnic version of the harem pant, with a deep crotch. Accessories include printed sneakers, white Chelsea ankle boots, and wool trapper hats.

‘This Is My Dream’ is a documentary by Theodore Stanley who followed Yohji Yamamoto during rare, intimate moments and traces an entire collection from start to finish, including design, casting, styling, and show production. In the short film, Yamamoto opens up about his inspirations, his love of music, and his aesthetic vision.

It is a big year for Yamamoto and adidas, who are currently celebrating a decade of collaboration. The presentation also included an installation of greatest footwear hits from the leader of Japan’s avant-garde and the forerunners of sport-style. The installation served as a reminder of the breakthrough concepts brought to reality by Yamamoto and adidas. And rest assured, there is much more to come.