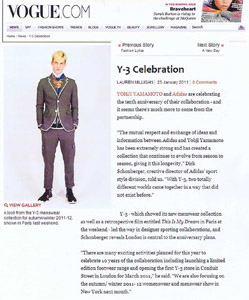 YOHJI YAMAMOTO and Adidas are celebrating the tenth anniversary of their collaboration - and it seems there's much more to come from the partnership.

"The mutual respect and exchange of ideas and information between Adidas and Yohji Yamamoto has been extremely strong and has created a collection that continues to evolve from season to season, giving it this longevity," Dirk Schonberger, creative director of Adidas' sport style division, told us. "With Y-3, two totally different worlds came together in a way that did not exist before."

Y-3 - which showed its new menswear collection as well as a retrospective film entitled This Is My Dream in Paris at the weekend - led the way in designer sporting collaborations, and Schonberger reveals London is central to the anniversary plans.

"There are many exciting activities planned for this year to celebrate 10 years of the collaboration including launching a limited edition footwear range and opening the first Y-3 store in Conduit Street in London for March 2011," he said. "We are also focusing on the autumn/ winter 2011- 12 womenswear and menswear show in New York next month."