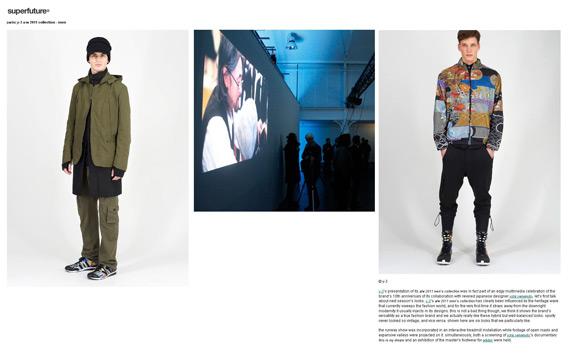 y-3’s presentation of its a/w 2011 men’s collection was in fact part of an edgy multimedia celebration of the brand’s 10th anniversary of its collaboration with revered japanese designer yohji yamamoto. let’s first talk about next season’s looks. y-3’s a/w 2011 men’s collection has clearly been influenced by the heritage wave that currently sweeps the fashion world, and for the very first time it strays away from the downright modernity it usually injects in its designs. this is not a bad thing though, we think it shows the brand’s versatility as a true fashion brand and we actually really like these hybrid but well-balanced looks. sporty never looked so vintage, and vice versa. shown here are six looks that we particularly like.

the runway show was incorporated in an interactive treadmill installation while footage of open roads and expansive valleys were projected on it. simultaneously, both a screening of yohji yamamoto’s documentary this is my dream and an exhibition of the master’s footwear for adidas were held.