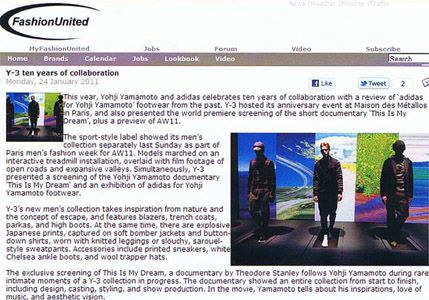 This year, Yohji Yamamoto and adidas celebrates ten years of collaboration with a review of ‘adidas for Yohji Yamamoto’ footwear from the past. Y-3 hosted its anniversary event at Maison des Métallos in Paris, and also presented the world premiere screening of the short documentary ‘This Is My Dream’, plus a preview of AW11.

The sport-style label showed its men’s collection separately last Sunday as part of Paris men’s fashion week for AW11. Models marched on an interactive treadmill installation, overlaid with film footage of open roads and expansive valleys. Simultaneously, Y-3 presented a screening of the Yohji Yamamoto documentary 'This Is My Dream' and an exhibition of adidas for Yohji Yamamoto footwear.

The exclusive screening of This Is My Dream, a documentary by Theodore Stanley follows Yohji Yamamoto during rare, intimate moments of a Y-3 collection in progress. The documentary showed an entire collection from start to finish, including design, casting, styling, and show production. In the movie, Yamamoto tells about his inspirations, love of music, and aesthetic vision.