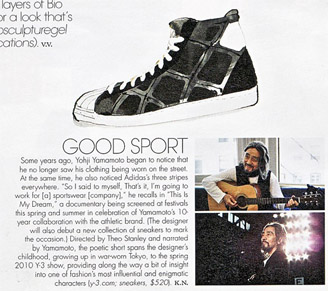 Some years ago, Yohji Yamamoto began to notice that he no longer saw his clothing being worn on the street. At the same time, he also noticed Adidas's three stripes everywhere. "So I said to myself, That's it, I'm going to work for [a] sportswear [company]," he recalls in "This Is My Dream," a documentary being screened at festivals this spring and summer in celebration of Yamamoto's 10-year collaboration with the athletic brand. (The designer will also debut a new collection of sneakers to mark the occasion.) Directed by Theo Stanley and narrated by Yamamoto, the poetic short spans the designer's childhood, growing up in war-worn Tokyo, to the spring 2010 Y-3 show, providing along the way a bit of insight into one of fashion's most influential and enigmatic characters.