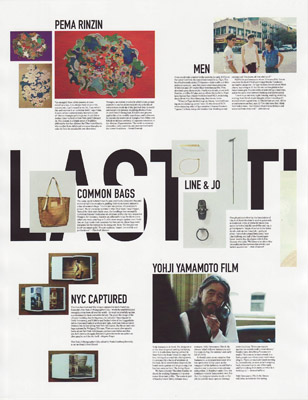 Yohji Yamamoto is tired. The designer is in the final stages of casting his Spring 2010 Y-3 collection, having arrived in New York City from Tokyo the night before. Sitting on a couch in a fitting room, illuminated by a bank of windows at his back, he is nevertheless inspired. He bends over a guitar and sings a song that has just come to him: The Jetlag Blues.

We have director Theodore Stanley to thank for making Yamamoto's spontaneous blues jam public. The scene is part of Stanley's new thirty-minute documentary, "Yohji Yamamoto: This Is My Dream," which follows Yamamoto and his team during the summer and early fall of 2009.

It should come as no surprise that Yamamoto, a constant innovator who has spent over thirty years at the vanguard of his industry, would find a creative way to express even extreme exhaustion. In Stanley's quiet film, the dominant voice is Yamamoto's own. Not that the designer speaks much on the job; he and his team operate through mute intuition."Everyone stands against the outside wall in total silence," Stanley says, describing Yamamoto's studio. "As soon as he says a word, in a flash, people are - from every wall - stepping in... Immediately, as soon as he's stepping back, everyone's gone, out of his sight, and he's looking with purity at what he's working on."