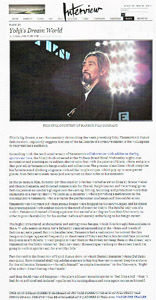 This Is My Dream, a new documentary chronicling the week preceding Yohji Yamamoto's S/S 2010 fashion show, implicitly suggests that one of the hallmarks of a creative master is the willingness to reinvent one's aesthetic.

Coinciding with the tenth anniversary of Yamamoto's collaboration with Adidas on the Y-3 sportswear line, the film (which screened at the Tribeca Grand Hotel Wednesday night) is as minimalist and exacting as its subject, shot in color but with the palette of black, white, and grays that prevail in Yamamoto's design studio and collections. The precise, clean lines which comprise his furniture and clothing originate with Adidas' triple stripes, which pop up in unexpected places, from fedoras to mesh tanks (and are turned on their sides on his sneakers).

In the 30-minute film, director/DP Theo Stanley (who has worked as DP on films by Bruce Weber and Chiara Clemente, and directed commercials for Chanel, Ralph Lauren, and Vera Wang) gives fashion junkies an insider's glimpse into the casting, fitting, tailoring, and production work that culminate in a runway show ("70 looks in 11 minutes"), while providing a meditation on the contemplative Yamamoto, who is at turns the perfectionist craftsman and the soulful artist.

Yamamoto was two years old when atomic bombs were dropped on his native Japan, and he traces his preoccupation with somber colors to the mood of post-war Tokyo. The dutiful only son of a widow, Yamamoto dreamed of being a painter but earned a law degree from Keio University in order to provide stability for his mother, before ultimately embarking on his design career.

The highly structured, architectural and androgynous designs, which first brought him acclaim in the A/W 1981 season in Paris, have defiantly resisted succumbing to the whims and trends of fashion as years passed. But two decades later, Yamamoto had a realization: he noticed that his designs no longer appeared frequently on the streets of Tokyo and Paris; his devoted fans collected his pieces as art objects. "I want people to wear them in the street; not keep them in the closet," says Yamamoto in the film's voiceover. "But I saw many three-stripes walking in the street. I said, I'm going to work in sportswear, for everyday life."

Fast-forward to the front row of Y-3's S/S 2010 show, in which Russell Simmons (whose Def Jam's Run-D.M.C. first rocketed shell-top Adidas sneakers to hip-hop heaven) is seated. Despite acclaim for the collection, Yamamoto—who calls himself "as simple dressmaker" in the film—says, "Right after a show, I start hating what I made."

And then the 68-year-old designer—who plays a bluesy acoustic guitar to "feel like a kid" when "I feel down and tired and isolated"—pulls out his cutting shears and once again recreates himself.