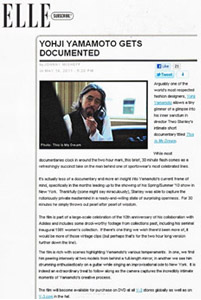 Arguably one of the world’s most respected fashion designers, Yohji Yamamoto allows a tiny glimmer of a glimpse into his inner sanctum in director Theo Stanley’s intimate short documentary titled This Is My Dream.

While most documentaries clock in around the two hour mark, this brief, 30 minute flash comes as a refreshingly succinct take on the man behind one of sportswear’s most celebrated lines.

It’s actually less of a documentary and more an insight into Yamamoto’s current frame of mind, specifically in the months leading up to the showing of his Spring/Summer ’10 show in New York. Thankfully (some might say miraculously), Stanley was able to capture the notoriously private mastermind in a ready-and-willing state of surprising openness. For 30 minutes he simply throws out pearl after pearl of wisdom.

The film is part of a large-scale celebration of the 10th anniversary of his collaboration with Adidas and includes some drool-worthy footage from collections past, including his seminal inaugural 1981 women’s collection. If there’s one thing we wish there’d been more of, it would be more of those vintage clips (but perhaps that’s for the two hour long version further down the line).

The film is rich with scenes highlighting Yamamoto’s various temperaments. In one, we find him peering intensely at two models from behind a full-length mirror; in another we see him strumming enthusiastically on a guitar while singing an improvisational ode to New York. It is indeed an extraordinary treat to follow along as the camera captures the incredibly intimate moments of Yamamoto’s creative process.

The film will become available for purchase on DVD at all Y-3 stores globally as well as on Y-3.com in the fall.